I was at the 2019 annual Victorian Fayre in Otley, a small town in the picturesque hills of Yorkshire, UK, when I came across a stall for SOMA yoga studio.

I pondered the thought of the Victorians practising their Downward Dogs. Soon, I realised the Victorian aspect of the event was actually the eccentric period fancy dress of the business owners. Sounds a little quirky, and it was. But it was also quaint, friendly, and fun. And the channel into my eternally grateful connection to my first Kundalini teacher, Polly Standeven.

Generally speaking, Kundalini is a less widely practiced form of yoga, but its famous devotees including Miranda Kerr, Reese Witherspoon, Alicia Keys and Kate Hudson have popularised the method.

Overall, there does still seem to be some apprehension on the subject—it’s a powerful discipline. Where other types of yoga such as Vinyasa are more dynamic, Kundalini is focused around energies. It really shifts energy, and in some circumstances can deliver a potent movement of repressed energy.

For example, one morning while practising, I felt a pain in my stomach. Throughout the session the pain moved to my chest. I breathed through it until I eventually exploded into tears. The pain shot out of me straight from the centre of my chest. I can only describe it as an arrow from the heart.

I’d unknowingly been holding onto some pain, and that day I felt like I got a piece of myself back. It appeared to clear some old, unshifted heartache. Was it intense? Yes. Overwhelming? Sure. But was I hooked? Absolutely.

If I could only practice one style of yoga for the rest of my days, it would be Kundalini.

So, what is Kundalini yoga?

Kundalini is known as the Yoga of Awareness. It’s a practice that brings awareness to self, to understand your truth and purpose, and unleash your true potential.

Kundalini is the name for our life energy, also known as Shakti, Chi, Prana or Life Force. During a session you look to awaken your Kundalini energy, which lives at the base of the spine. You might have seen the double snake symbol that curls up with a pair of wings at the top. This represents your Kundalini energy rising through the chakras.

The sessions generally work with Kriyas, a sequence of movement mediations where, honestly, you are doing some fairly bizarre, repetitive, and sometimes intense movements alongside all-important breathwork. It involves chanting, mantra meditations and, sometimes, songs. A much more vocal yoga practice.

Leave your ego at the door, as you’ll probably make some funny sounds along the way. The idea is to push through the barriers of self (and mind chatter) and use the breath to align yourself with stillness and awareness.

After each of these mini-movement meditations, you’ll sit with your new energy. True stillness of the mind follows. Sometimes dizziness, tingles, often smiling or maybe giggling, perhaps even tears. But at the core you’ll release, unblock pathways, and balance your energy.

Russell Brand, another famous fan of the technique, refers to it as the ‘crack cocaine of yoga’. There’s a reason for that.

What are the benefits of Kundalini yoga?

There are physical benefits from Kundalini yoga, however the focus is internal, aiming to channel the energy inside all of us.

Where can you practice Kundalini yoga?

Standeven, who created the North & Soul yoga community online last year, has 15 years of wisdom-filled Kundalini practice at your fingertips. Choose from recorded classes, live sessions and workshops, alongside a blossoming community of like-minded people and two more wonderful yoga teachers. You can sign up for a two-week free trial with North & Soul here.

I connected with Izza through a friend last year, when she hosted a powerful Reiki circle that turned into a 90-minute mentoring session, and her advice blew me away. Izza hosts a free connected community on Facebook. Kundalini is one of the tools Izza utilises to empower women and support them in connecting to their truth and purpose while healing. She teaches weekly online Kunda classes, which take place every Thursday. Find out more via her Instagram page.

Based in Leeds, UK, Yoga Kula offers an online Kundalini Breath & Kriya School for all levels. The weekly class is led by Amanda Winburn, who has deep passion for pranayama and believes it has transformed her life, her health, and her body. Blossom & Preen‘s editor, Amanda Batley, is also a newbie at her sessions. Book online either via the Yoga Kula website or the MindBody app.

Have you tried Kundalini yoga? Let us know below! 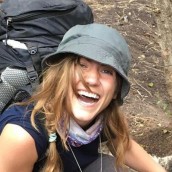 Katie Jane is a Yorkshire-born yogi and poet, who has recently made the move into writing for work after a decade in hospitality and events. She loves to inspire authentic living and share knowledge for connection to consciousness. KJ is currently working on Joy—her yellow Sprinter camper conversion—to fulfil her dream of living an off-grid, remote life while writing a sci-fi novel. A project that's a whole world of epic adventure hanging somewhere between mind and ether.

Sleep Well: Our Favourite Products For A Better Night’s Rest

An Introduction To Ayurveda And How To Eat For Your Dosha

SOMETHING NEW IS COMING!

Sign up to be the first to know and receive special discounts...